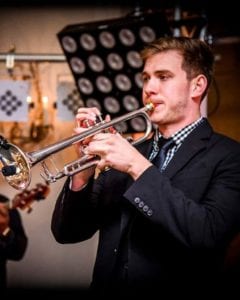 Jordan Carr, originally from Calgary, Alberta, Canada, has been an ever-evolving musician from an early age. Picking up the trumpet in band class during the middle of his 6th grade year, Jordan was the weakest musician in his age group. However, he immediately discovered a passion for music, particularly classical, and with much practice was awarded the Royal conservatory of music medal for best provincial grade 4 score, in 2007. He continued to push himself throughout secondary school, receiving the outstanding musician award each year from Lord Beaverbrook High School, and was recognized again by the province of Alberta for the most outstanding solo at the Alberta International Band festival, in 2009. It was only in late high school that Jordan branched out from his classical roots into new musical grounds; performing with two high school big bands, a local community big band, a high school jazz combo, an original jazz combo, the pit orchestra for a production of “Into the Woods”, and a few solo performances, on top of remaining in the high school concert ensembles.

Following graduation, Jordan was offered a scholarship to attend the University of North Texas. Jordan studied music theory, jazz, and English, and took private lessons under the tutelage of Jay Saunders (Stan Kenton Orchestra) and Paul Stephens (Maynard Ferguson). While at UNT, Jordan had the opportunity to record two albums with the Downbeat award-winning ensemble, the Two O’ clock lab band, as well as an album with The Latin Jazz Lab band, which subsequently won a Student downbeat award for Latin Group Undergraduate College Outstanding Performance, in 2016. He performed with these two bands, the Grammy Nominated One O’ clock Lab band, and many bands outside of the school environment during this time. Upon completion of his studies, Jordan moved to Dallas to further his musical career.

Jordan has become a prolific performer in many styles of music like Jazz, R&B, Hip Hop, Blues, Funk, Neo Soul, Merengue, Salsa, Pop, Fusion, Latin Jazz, and classical. As such has shared the stage with many notable artists across a wide variety of styles, from artists like Casey James (American Idol finalist) or Cynthia Scott (Ray Charles), to Grammy Award winners like Raul Acosta (Oro Solido) and Robert “Sput” Searight (Snarky Puppy). He has also shared the stage with Wycliffe Gordon, Bob McChesney, Victor Goines, Sean Martin, MonoNeon, Hannah Kirby, and Brian McDonald to name a few, and he regularly plays with many local bands in the DFW area.

Back To All Musicians